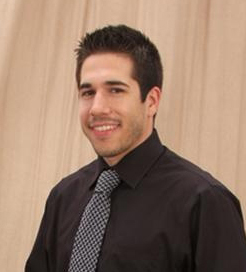 My name is Rick Ross and I hold a Bachelor’s degree in New Media Technology and a Master’s degree in Recording Arts and Technology. Following graduation I wanted to learn more about the specifics of audio for video games and did so through Steve Horrowitz and Scott Looney’s Game Audio series on MacProVideo. I was so impressed by their teaching and tutorials I went on to attend their course at Pyramind to gain more hands-on experience with FMOD Designer, FMOD Studio, Fabric, and Unity implementation.

My level is an underground first person shooter where man is pit against robots equipped with rocket launchers and machine gun turrets stationed throughout the map. My process began by sifting through my collection of recordings, sound effects, and synthesizers to design sounds appropriate for the level created in Unity. Through layering, EQ, and other DAW processing effects I was able to produce and implement everything from gunshots, footsteps, explosions, and robotic vocalizations based on my own voice recordings into the level. Using the implementation tools that were taught I was also able to add adaptive music based on the number of enemies attacking, arrays, pitch, and volume randomization to keep things sounding fresh, and implement visible/invisible triggers to play audio cues throughout the level.

This process helped me further my goals as an audio designer by learning the cutting edge tools and concepts used throughout the industry from indie games and mobile apps to AAA titles. By having a game level to work with and two very helpful teachers to answer my questions I was able to get the most out of my time invested in learning game audio practices. Since my experiences I’ve joined two development teams as sound designer, pieced together demo reels of my work, and continue to build a network of friends throughout the industry.